12 things you must do in Cappadocia - Yaba Travellers
2404
post-template-default,single,single-post,postid-2404,single-format-standard,ajax_updown_fade,page_not_loaded,,qode_grid_1400,qode_popup_menu_text_scaledown,footer_responsive_adv,transparent_content,qode-theme-ver-16.0,qode-theme-bridge,wpb-js-composer js-comp-ver-5.4.7,vc_responsive
T U R K E Y

12 things you must do in Cappadocia 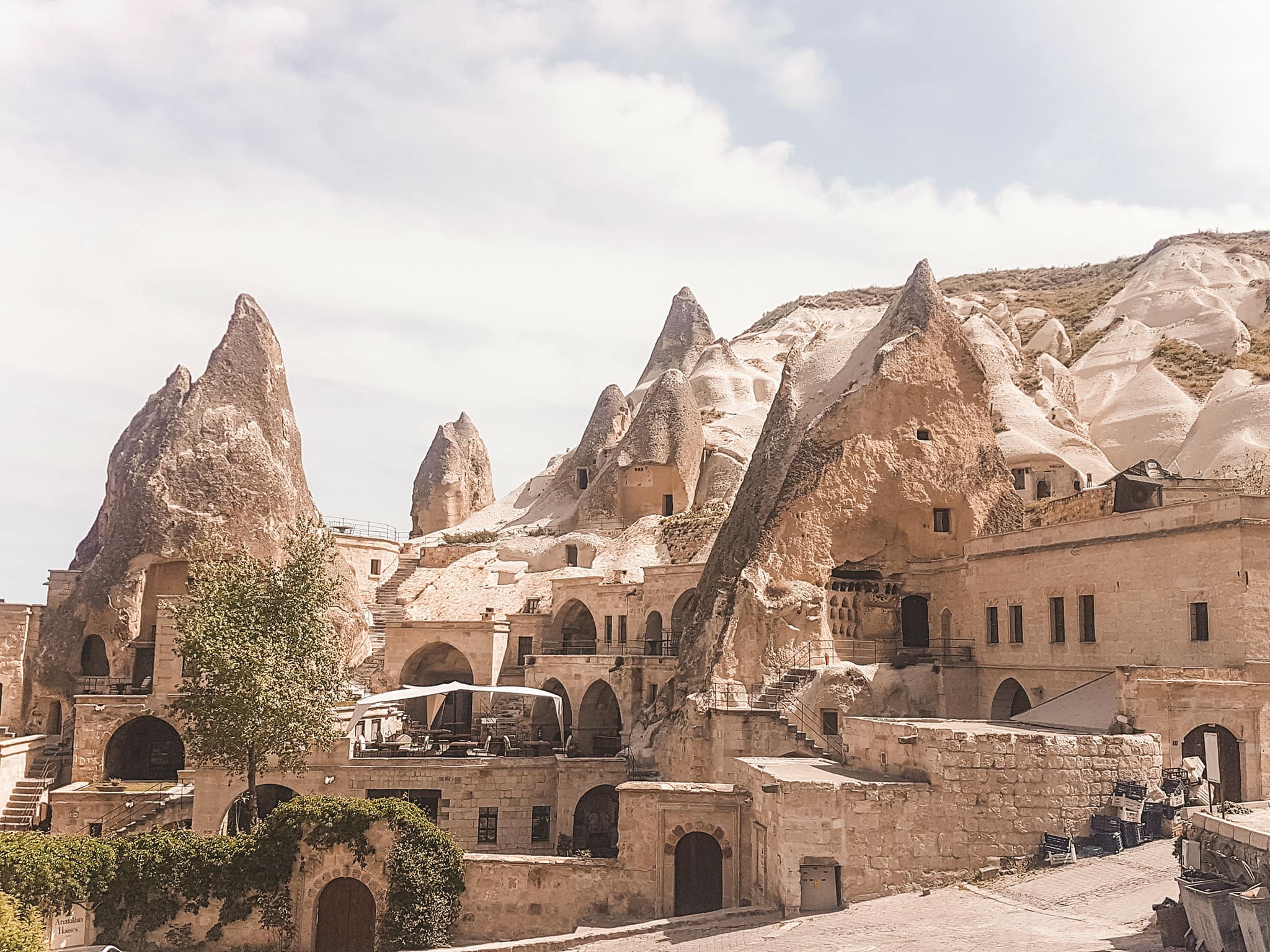 06 May 12 things you must do in Cappadocia

Cappadocia is one of our favorite destinations. We visited Cappadocia first time in 2018 and we returned next year as this was the destination we chose to organize our first group trip. So after two visits at the dreamland, it’s time to share with you 12 things you must do in Cappadocia ! Let’s go!

How to get there

The easiest way to go to Cappadocia is by air through Istanbul. But first, to be clear Cappadocia is a region, it is not a city (a common confusion). There are several flights (mainly Turkish Airlines & Pegasus Airlines) and the flight time is about 1.30 hours from Istanbul. There are two airports, Kayseri Airport (ASR) and Nevşehir Airport (NAV). We went from Kayseri airport both times. The prices however were similar.

Cappadocia as we said is a region of eastern Turkey and consists of 5 provinces. We chose the province of Caesarea and specifically the village of Göreme, known for its special rock formations and the balloon rides. The reason is that it quite small, picturesque and gives you the feeling of a village. Certainly in recent years it has become more touristic and this is obvious, but it’s still charming. Other alternative cities that we would propose to stay except Göreme, are Urgup or Uchisar. Accommodation prices are similar and quite affordable.

Visit the underground cities of Cappadocia.

One of the most impressive things you must do in Cappadocia  is to visit an underground city. The two most famous cities are Kaymakli Underground City and Derinkuyu Underground City. Both are extremely interesting and they are open for tourists. During the Byzantine era more than 3,000 people lived in Kaymakli, as they were trying to protect themselves from Arab invaders. This underground city is made up of 8 floors (under the ground) and you can still see the places that were once stables, rooms, warehouses, etc. Derinkuyu, the other underground city has a similar history. As you can understand the spaces in the underground cities are quite narrow so if you are claustrophobic you should think about it. It is good to take your visit early in the morning or late in the afternoon to avoid crowds.

The highlight of our trip and something that can’t miss the list of the “things you must do in Cappadocia ” is the hot air balloon ride! The whole experience was wonderful, while the balloon view the early morning hours is unique. The lunar landscape as well as the other balloons in the air makes it quite special. Add the magnificent sunrise and you have the perfect experience. If you pay attention to some important details, it can become one of your most memorable travel moments. The activity is expensive and it is wise to book in advance. The companies that we have tried and ended up quite satisfied with are the Royal Balloons & Butterfly Balloons.

In Uchisar, just 5 km from Göreme you will find the highest point of the region, Uchisar Castle! This castle is basically a huge rock that has been carved out. The most interesting fact is that people used to live there. Yes, in the rock! Today it mainly hosts pigeons. Also, the entry into the interior is not allowed due to possible landslides. However, the view from the top is breathtaking, while climbing is quite easy. Better avoid lunch, especially if you are traveling during summer. The entrance fee is about 2 euros.

Wandering in the Love Valley

Cappadocia is full of rocks with particular shapes. When you find yourself in the valley of love, you will understand very quickly why is called like that. Huge rocky-shaped rocks flood the place, creating a particularly “loving” and impressive landscape. The most interesting picture of the valley for us was from above during our balloon ride. However, it is very impressive from close too.

Another wonderful creation (made by mother nature) is the Fairy Chimney! Another well-known name for this area is Pasabag or Monks Valley. Although the name refers to something magical the truth is that these particular pylons do not accommodate fairies and the reason of their particular morphology is the quality of their materials (volcanic ash & melanolite). It’s a hot spot for photos so you can expect a few people. However, it is worth spending an hour or two to stroll around and take photos  that reminded us Sarakinos beach in Milos and Meteora.

These are two different museums – cities, but they have the same “concept”. These cities are built in the rocks. Once inhabited, they now operate as museums. The Zelve Open Air Museum is much larger than the Göreme and is located in a huge valley in contrast to Göreme where the area is more crowded. However, if you want to see better and clearer hagiographies on the rocks (yes, there were Byzantine churches) you will do so at the Göreme Open Air Museun. In terms of location, the Göreme Open Air Museun is located in the city of Göreme (entrance cost about 6 euros), while the Zelve Open Air Museum is 10 kilometers from there (entrance fee of about 2.5 euros).

Stay in a Cave Hotel

One more winner on our list with the things you must do in Cappadocia  is to stay in a cave hotel! Several hotels have been “restored” and these rocks once inhabited by the villagers now offer a special experience. In general the prices are affordable and there are accommodations for every budget and taste. For those planning to visit the summer area, some of them also offer a swimming pool.

Enjoy the sunset in Red Valley

Something that you will not find everywhere written but undoubtedly worth doing in Cappadocia is to see the sunset in the red valley. You can see a great sunset from the sunset point in the city of Goreme (the name also says!). However, we believe that the one at the Red Valley was much dreamier and you will have the opportunity to enjoy it with fewer people. There is also a small café with sofas and tables at the edge of the cliff and you can enjoy the incredible landscape with a tea, coffee or hot wine!

When you are in Cappadocia, you cannot miss their delicious food. Their cuisine is quite rich in spices. Two typical dishes of the area are Pottery Kebap ( kebab in clay) and something like traditional ravioli (manti). The major ingredient of Pottery Kebap is meat, veal, or chicken (can be made without meat for vegetarians) baked in a spicy earthen for many hours along with vegetables. It was delicious and we ate it at the Dibek Restaurant. However, it is advisable to book and pre-order it. Manti is pasta stuffed with minced meat and served warm with yogurt and sauce (red sauce with lemon juice). Other remarkable restaurants you can go to are Top Deck & Fat Boys for tasty yogurt kebab. Prices are about 8-15 euros per person.

Learning the art of pottery in Avanos.

Something else that you must do in Cappadocia is to visit a ceramic workshop. The area has a tradition because of the red river (the longest river in Turkey) and craftsmen have access to red clay, ideal for pottery. At Avanos you will have the chance to visit one of the family workshops and see the whole process of producing a pottery. Maybe you have the chance to try it too! It is very interesting, and many of the ceramics are works of art as they are made by hand. However, a great deal now has been made in industries and the plethora of ceramics can be found in lower prices. Avanos is a tourist place, but it’s worth a walk especially if you spot a workshop off the beaten track. We visited it as part of the Green tour.

Something else that is wise to include to the things you must do in Cappadocia  is to wander in a valley. Walking in Pigeon Valley is a great opportunity to do so. The Pigeon Valley is very close to Uchisar so you can combine them in one visit. The name of the valley derives from the fact that the carved rocks of the valley have sheltered many pigeons as the farmers used their devotees as a fertilizer. The short route is about 3 km, but you cannot walk the whole road. As you can understand in the valley you will not find shops etc, so keep the water with you!

The first time we visited Cappadocia we moved around exclusively by car. We rented it for 30 euros a day and proved to be a good choice because driving was easy, but we also had our freedom. If you do not want to rent a car, there are several tours that you can book either through your hotel or directly. The most popular tour is the Green tour & Red tour which include a set of attractions. On our second visit we did those two tours and rent a car (just for one day) to cover as much as possible.  So, take your list with the things you must do in Cappadocia and just enjoy the ride!

Balloon ride CAPPADOCIA, CAPPADOCIA, GUIDE, Things you must do in Cappadocia, TRAVEL, TURKEY